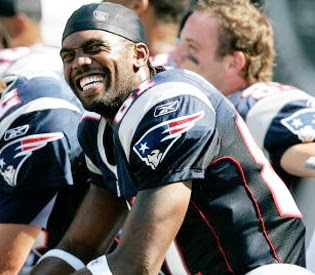 This article is courtesy of Tom Silverstein from the Packers Blog on JS Online.

Phoenix, Ariz. - I got a chance to ask New England wide receiver Randy Moss whether he was ever close to becoming a Green Bay Packer this off-season, and his answer was interesting.

Basically, Moss said, if the Packers had treated him better in negotiations he might have agreed to play with Brett Favre instead of Tom Brady. Moss and Favre know each other through their association with agent James (Bus) Cook and when Favre heard there was a chance the Packers might be able to swing a trade with Oakland, he called Moss.

"He tried (to reach me), but I was a little tied up and wasn't able to talk to him," Moss said. "Green Bay was in the picture, but the things told to me about maneuvering money around and making it a good fit - the Packers were really talking a lot about the wrong things, not the right things.

"When they started talking about the wrong things I hung the phone up and didn't want to talk to them anymore. I thought about it. It was something that could work out just for the fact Brett Favre was there, but I think as the conversation continued throughout the day and the next day, I really didn't want to go to Green Bay."

Moss' contract with the Raiders called for base salaries of $9.75 million in 2007 and $11.25 million in 2008, but he was willing to tear that deal up and accept a one-year $3 million contract with the Patriots. The Packers wanted a portion of Moss' salary to be tied to performance instead of being earned as a base salary. For vested veterans like Moss, the base salary is guaranteed if the player is on the roster after the first day of the regular season.

Moss said besides the money, the Packers put too many conditions on him coming to Green Bay.

"It was like they were telling me that they're going to take a chance on me, but if you do come here these are the things you have to work out, 'Be on your best behavior. Donald Driver is the top receiver here so don't come in there trying to step on his toes,' things like that. I didn't think that was right because my whole career things have been taken out of (context) at times, but at the end of the day all I wanted to do was win games. It's hard to win games.

"If we do the things we're supposed to do on Sunday, we'll go undefeated and it will be historical. I don't feel they (the Packers) really wanted me. Brett wanted me, but I don't thing the Packers' organization wanted me."

Moss caught 98 passes - the third-highest total of his career for 1,493 yards and an NFL-record 23 touchdowns this season. With him in the lineup, the Patriots went undefeated during the regular season, setting an NFL record for most points and most touchdowns in a season, and with a victory over the New York Giants Sunday can become the first team to go 19-0.

During the playoffs, Moss has not had much of an impact. He has just two catches for 32 yards.

Moss is scheduled to become an unrestricted free agent in March, but he said today that he would like to finish his career with the Patriots. Given the way things worked out with Moss, the Patriots are probably willing to talk about a long-term contract, but they have been tight with money in the past and might decide they got what they wanted out of Moss.
Posted by Matt Z at 4:43 PM

Mansour Engineering have a refined understanding of client and market priorities in all facets of mechanical, electrical and civil engineering from engineering assessments and studies through typical and specialized design commissions, document production, contract administration, design/build, energy studies, field inspection and supervision, to building systems commissioning and consulting services for building operations.