Where does Favre rank among greats? 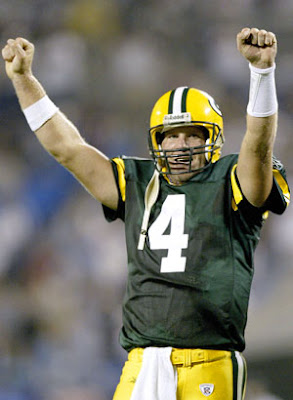 An interesting article on Foxsports.com asks the question: Where does Favre rank among greats? Michael David Smith from footballoutsiders.com has the story.

Verdict: Unitas
Steve Young
A tough choice. Young had some absolutely incredible passing seasons, including six different seasons in which he led the league in passer rating. In those seasons, he had stats that Favre couldn't touch. If I could take Young's best half-dozen seasons vs. Favre's best half-dozen seasons, that would be an easy choice: Young in a laugher. But then again, Favre has out-gained Young by more than 25,000 passing yards. (Favre has 58,361 career passing yards; Young retired with 33,124.) Young had six seasons of 3,000 or more passing yards; Favre has had 15. And Young played with better receivers and a more quarterback-friendly offense. Looking at the totalities of their careers, Young falls short.
Verdict: Favre
So there you have it. Favre is the eighth-best quarterback in NFL history, behind Baugh, Elway, Graham, Marino, Montana, Tarkenton and Unitas. Let the arguments begin.
Posted by Matt Z at 4:29 PM No comments:

Prince of Power - Fielder Blast 2 HRs to give him 50 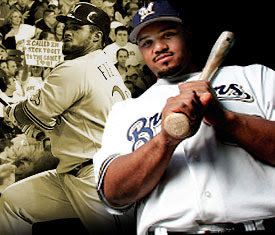 Fielder became the youngest player in major league history to reach 50 home runs Tuesday night, socking two out of the park to propel the Brewers to a 9-1 victory over St. Louis at Miller Park.
The Brewers' second consecutive romp over the Cardinals made their seemingly impossible task of catching the first-place Chicago Cubs in the National League Central a bit more possible.
Thanks to Chicago's 4-2 loss in Florida, the gap was narrowed to two games, with five to play for both teams.
"Just keep playing, control what you can control," said manager Ned Yost, who has tried to keep his players focused on a day-by-day approach.
No one is having much luck controlling Fielder these days. With a two-run homer off Braden Looper in the first inning and another two-run shot in the seventh off Kip Wells, the big first baseman reached 50 in a season at 23 years 139 days of age.
The great Willie Mays had been the youngest to hit 50 at 24 years 137 days in 1955.
"Actually, Billy (Hall) told me," Fielder said. "That's an awesome feat. Now my kids can know that one time their dad was pretty good."
Speaking of dads, Fielder normally shies away from talk about the well-documented estrangement with his father, former big-league slugger Cecil Fielder. But he made it clear that one of his primary goals is to escape from the shadow of his father for good.
Fielder said he had no intention of keeping the 50th home run ball, but was hoping for No. 52.
"My dad had 51 (as a season high)," Fielder said. "Then, he can't say anything."
Fielder was not happy about comments his father made in a magazine article earlier in the year, claiming his son never would have been a first-round draft pick if he hadn't paved the way. The two haven't spoken for years and that rift apparently has widened.
That subject resurfaced when Fielder was asked about the "MVP!" chants at Miller Park and if he thought much about winning that award.
"It would be a cool award to get but that's not something I think about," he said, "besides the fact my dad never did it. If I do get it, that shuts him up again."
Fielder said he was "serious" about trumping his father, adding, "A lot of people said that's the only reason I got drafted. That's what drives me. People said I was too big and all this, and the only reason I got drafted was because of the name.
"That's why I'm so passionate about playing. I don't mind people comparing me to him but I'm a completely different player. One day I want people to mention my name and not have to mention his."
As for the recent comments from his father, Fielder said, "You've got to look at who's saying it. Let's be honest. He's not really the brightest guy."
Read More here from Tom Haudricourt's article in today's Milwaukee Journal Sentinel here:
http://www.jsonline.com/story/index.aspx?id=667470
Posted by Matt Z at 8:12 AM No comments:

FAVRE & THE PACK ON A ROLL 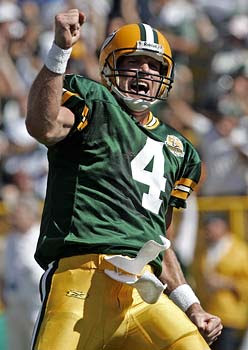 Ok so it's been awhile since my last post. The Packers beat the Chargers 31-24 last Sunday in an exciting game that had fans on the edge of their seats. Favre led the Packers to a come from behind win with a late 4th quarter TD pass to Greg Jennings with a little more than 2 minutes to go in the game. The Packers Defense stepped up and intercepted Phillip Rivers pass to seal the game. Nick Barnett ran back the interception to the 2 yard line and Brandon Jackson ran it in for the insurance score.

Favre had a magical game and tied Dan Marino with 420 career TD passes. Favre was 28-of-35 for 369 yards and three touchdowns. McCarthy put the ball in his hands and let Favre win the game himself. The Pack ran the ball about 19 times and frequently had an empty backfield and 4 receivers spread wide. Favre picked apart the Chargers weak secondary and helped them improve to 3-0 and on top the NFC North Division. Writers from Fox Sports have the Packers ranked 5th in the Power Rankings and fans are excited with the quick start.
Nobody expected the Packers to come out on fire and almost nobody expected them to be 3-0 going into this Sunday's match up against the Vikings.
Posted by Matt Z at 7:47 AM No comments:

Despite Win, Badgers fall to #7 in AP & Coaches Poll 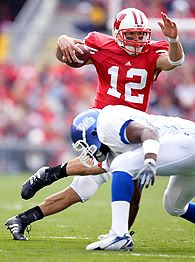 While Donovan had started and won a game on the road before, he registered his first fourth-quarter comeback Saturday in the 20-13 victory at UNLV.
Donovan has now won four straight games as a starter, going back to last season, but there is something defining for a quarterback, to huddle the offense in the fourth quarter, needing a touchdown to win the game.
"We knew we needed to put points on the board and take care of what we needed to do," Donovan said Sunday of taking over at the UW 39-yard line, trailing 13-12, with 7 minutes, 33 seconds to play. "There was no doubt in my mind we were going to do it. There was definitely passion in the guys' eyes and a little extra fire you could just feel."
Donovan coolly completed an 8-yard pass to tight end Travis Beckum to start the drive, then connected on a 6-yard pass to Luke Swan on third-and-2 for the initial first down.
Tailback P.J. Hill did a lot of the dirty work, carrying six times for 23 yards and picking up a fourth-and-1 at the Rebels' 38 with a 3-yard run. But it was at the UNLV 29, on first-and-15, following a delay-of-game penalty, that Donovan made what could turn out to be one of the most important plays of the season.
With just about everybody on the defense keying on Hill, UW offensive coordinator Paul Chryst called for naked bootleg by Donovan to the left.
"If you 're a coach up in the box, you tell (the defensive players), 'Hey, here comes 39, here comes 39,' " UW coach Bret Bielema said of Hill's number. "A great call by Paul and ultimately great execution by T.D."

Even though he had told Chryst earlier in the game to give him the ball, Hill was delighted when the bootleg call came. "I loved that play," Hill said. "I was like, It's definitely going to work.' ' '
First, Donovan faked a handoff to Hill, who was going right, along with everybody else on offense except for Swan, who was wide to the left and dragged his defender downfield on a pass route.
When Hill was asked how many defenders were sucked in by the play fake, he smiled and laughed.
"We were watching the film (Sunday) and like the whole defense, line, linebackers," Hill said. "(Donovan) had that one guy to beat and he beat him."
That one guy was linebacker Star Fuimaono, who Donovan initially thought was lined up in the perfect spot to foil the play.
"They had a defense set up that probably could have reacted pretty good to it, with a guy coming off the edge," Donovan said. "That goes back to P.J. doing a good job all day. A lot of their eyes were on P.J."
With Donovan's speed, he had no trouble getting outside of Fuimaono, who made a futile dive. Swan, meanwhile, was downfield at the 15, putting a block on cornerback Geoffery Howard.
That's a hard block to make, since it's out in the open, where holding calls are often made, and lasts for a couple of seconds.

After Donovan got past the block, he was in a race with cornerback Mil'Von James for the end zone. Donovan made an incredible leap from the 3, reaching out the ball with his right hand to swat the pylon for a touchdown with 1:53 left.
Courtesy of Tom Mulhern from today's Wisconsin State Journal:
http://www.madison.com/wsj/home/sports/badgersFB/231667
Posted by Matt Z at 10:27 AM No comments:

Packers pull out a win 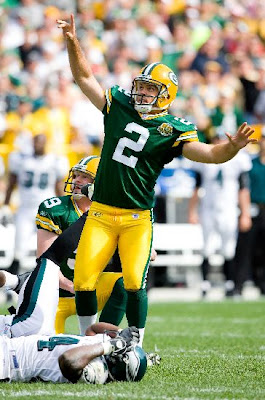 While Sunday's season opener might not have been pretty, it's still a W in the win column. The Packers got a lot of help from the football gods at Lambeau, recovering 2 fumbled punts, 1 for a TD and the other to setup the winning 42 yard field goal from rookie kicker Mason Crosby. Crosby was 3-3 on field goals, hitting from 53, 37, and the game winner of 42.

The offense looked terrible in the 16-13 win over the Eagles, never reaching the end zone. The obvious hole showed up at RB, with rookie Brandon Jackson only gaining 40 yards on 15 carries. With all the cap money the Packers have, there is some question to what Ted Thompson is thinking sticking with the current RB situation.
If this trend continues, it should be a long season for the Packer offense. While the win was great, future HOF QB Brett Favre isn't getting too excited. "The competitive side of me is not letting me enjoy it as much as I should."
The Packers defense looked great. They held the Eagles to 13 points all day, created turnovers, and made the Eagles offense go 3 and out on many occasions. The D looks to be the strength of this year's Packers.
The Packers travel to NY to take on the Giants next Sunday. The Giants could be without QB Eli Manning who left yesterday's game with a bruised shoulder.
Posted by Matt Z at 9:50 AM No comments: