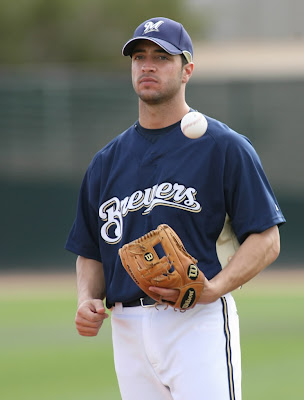 In the end, the astounding things Ryan Braun did at the plate trumped whatever things he didn't do in the field.
The Brewers' third baseman won the 2007 Jackie Robinson National League Rookie of the Year Award on Monday from the Baseball Writers Association of America. Braun edged Colorado's Troy Tulowitzki to become Milwaukee's first rookie of the year since shortstop Pat Listash won the American League honor in 1992.
Braun was listed first on 17 of 32 ballots, second on 14 and third on one for 128 points, based on the 5-3-1 tabulation system. Tulowitzki was first on 15 ballots and second on the other 17 for 126 points. The two-point differential was the closest in the NL since the current system was adopted in 1980.
Braun's offensive numbers made a compelling case. He batted .324 and led NL rookies with 34 home runs and a .634 slugging percentage, breaking the Major League rookie record set by Mark McGwire, who slugged .618 for Oakland in 1987. Braun drove in 97 runs and stole 15 bases.
He ranked in the top four among NL rookies in average, slugging percentage, extra-base hits, RBIs, runs, total bases, triples, multi-hit games, hits, batting average, stolen bases and on-base percentage.
Imagine if he had played all season.
Courtesy of Adam McCalvy from MLB.com.
Posted by Matt Z at 2:10 PM No comments: 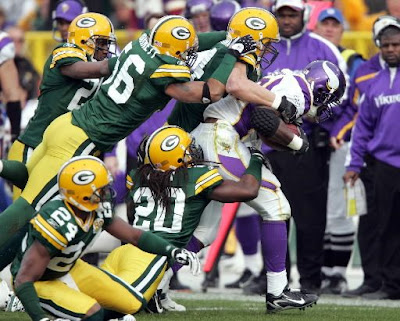 The Packers improved to 8-1 after blowing out the Minnesota Vikings 34-0 on Sunday. The Vikings were coming off a victory against the San Diego Chargers, where rookie RB Adrian Peterson rushed for an NFL record 296 yards. The Packers Defense held him in check to 45 yards on 11 carries. Peterson injured his knee in the 3rd quarter when he was tackled by Al Harris after a short pass.


As for the Packers, they dominated the entire game. Ryan Grant rushed for 119 yards, 1 week after becoming the 1st Packer this year to rush for 100 yards. Favre threw for over 300 yards (351) again and 3 TDs with 0 INTs. And the defense held the Vikes to 0 points, 0-11 on 3rd down, and forced an interception on the goal line.


All and all the Pack put together a complete game and silenced the na-sayers joining Dallas for the 2nd best record in the NFL at 8-1. Detroit also lost on Sunday and dropped to 6-3 on the season giving the Packers a 2 game lead in the North.


Next up, the Carolina Panthers who are 4-4 this year with an even older QB than Favre in Vinny Testaverde.