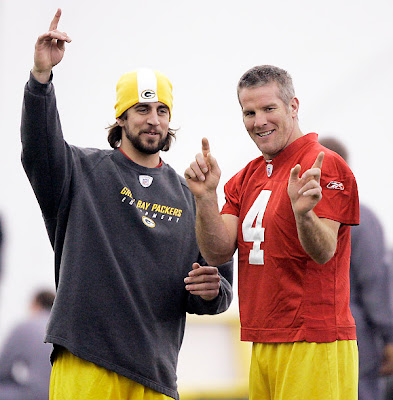 If he were to put both quarterback's physical statistics on one of the magnetic boards the Green Bay Packers use to evaluate college players, he'd barely be able to tell the difference.

"If you look at their magnets when they're on the board, they're almost identical," McCarthy said. "Both have 10-inch hands. Both have 30-something-(inch) arm length. They're big-shoulder guys. They had very similar body types coming out. They both torque the hell out of the football."

The comparison stops there, however, when it comes to accomplishments. There are more than a few major differences between them.

Favre turns 40 on Saturday, holds almost every significant NFL passing record, already has a place waiting for him in the Hall of Fame and has won a Super Bowl. Rodgers is 25, has a losing record as a starting quarterback and has yet to prove he can carry a team emotionally and physically.

When the Packers meet the Minnesota Vikings Monday night at the Metrodome, it won't be Brett Favre vs. Aaron Rodgers. But this, Rodgers' 20th start, stands to be the most important moment in his career, and plenty of people will be watching to see whether he can do what Favre has done so many times: win when it matters.

That is the true measurement of a quarterback, many believe.

"I see so many people putting a lot of different meaning into so many different things these days," former Packers general manger Ron Wolf said. "It makes statistics more (important). But the bottom line is the wins and the losses. That tells you whether a guy is good enough."

Rodgers has a long way to go before his career can be measured.

But to date, the closest he has come to picking up the team and carrying it on his shoulders was a 48-25 victory at Detroit last season when he completed 24 of 38 passes for 328 yards and three touchdowns. He engineered two scoring drives late in the fourth quarter to give the team breathing room and then let the defense finish the job with two interceptions returned for touchdowns.

He has had terrific moments, like his 50-yard touchdown pass to Greg Jennings that beat the Chicago Bears in the season opener this year. He also drove the team into Bears territory last December for what should have been the game-winning field goal. He did the same at Minnesota last year, albeit only to the 35, resulting in a 52-yard attempt.

But taking over a game? Not yet.

As good as his numbers have been - he has a 95.2 career passer rating (62.3% completion percentage, 5,081 yards, 33 touchdowns and 14 interceptions) - his record as a starter is 8-11. The losing record isn't all his fault, but some of it is. When the Packers needed touchdowns in close games last year, he was only able to deliver field goals.

On Monday night, he'll get the ultimate chance to prove himself.

"He has a year under his belt," McCarthy said. "He has two experiences against the Vikings under his belt. He had the opportunity to play up there in the Metrodome, which always is a tough thing for a quarterback the first time, going up there noise-wise and so forth. I think the biggest thing is he clearly has more experience."

There's no question that Rodgers has been a productive quarterback, but part of being a great one is having the confidence to take shots downfield when you need to. Rodgers played behind one of the most aggressive quarterbacks ever, but he has not shown that kind of daring and by most accounts would rather swim in a shark tank than throw an interception.

The ability to make a clutch throw in the critical moment of a hotly contested game is exactly why the Vikings decided they wanted Favre. They weren't looking for him to throw for 4,000 yards, they just wanted him to make two or three clutch plays that help dictate the final outcome and make a game-winning play or two as he did last Sunday against San Francisco.

"(Before last week) he was a caretaker," Vikings coach Brad Childress said with sarcasm. "I'm not hearing that much this week. You don't want a guy that's a conservative guy. You want a guy that plays within the parameters of your system. Is there some inherent risk in some of the things that you do? Absolutely.

"But I'd rather have somebody that has ice water in his veins and competes like crazy than somebody that's like, 'Yeah, I've got that throw but let me go ahead and check it and duck it down here.' I can assure you that that mentality, his mentality, hasn't changed."

When to take a riskMcCarthy isn't sure anyone will ever take the chances Favre does and his expectation isn't that his new quarterback does the same. But he thinks it's a process for Rodgers to understand when he can take chances and when he can't.

"I think Aaron has been raised in a much more systematic (fashion), and he has bought into that," McCarthy said. "But I see him, he gets more confident as they all do with every game that goes by. He's not scared to throw the tight ball."

For Rodgers to achieve greatness he may need more of that wild abandon Favre has carried with him since the day he stepped on the football field. It's possible he'll never have it and will be just a solid quarterback with great statistics and nothing much else to show.

But it could be he's still breaking out of a shell that has surrounded him most of his football life. He has always been a student of the game, using his brain as much as his outstanding athletic ability, and has been schooled in fundamental football from a very young age. In the two years he was at the University of California, he always played within coach Jeff Tedford's scheme and was thought by some scouts to be too much of a system quarterback.

Rodgers came out of Cal with a tight, rigid throwing motion that underscored his devotion to Tedford and his style of coaching quarterbacks. In four years with the Packers, Rodgers has developed a more fluid style both in the way he holds the ball and the way he throws it.

Physically, he has worked his body to a point where he has become a first-rate scrambler, deep-ball thrower and iron man.

The next phase for Rodgers is to become more than just a stats machine. He also might have ice water in his veins, as McCarthy has said, but he played safe during his first season as a starter and didn't always "throw his receivers open" as McCarthy terms it. In other words, don't wait until the receiver is open, anticipate his break and throw it to a spot where the receiver can beat his defenders for the ball.

It is not a coincidence that the Packers' receivers suffered a big drop in run-after-the-catch yards when they went from Favre to Rodgers. Part of getting those yards is having a quarterback who leads his receivers and throws it before defenders can react to it.

Rodgers shows no hesitancy in hanging in the pocket and throwing deep and isn't afraid to take a hit. But as accurate of a passer as he is, there are still some throws down the middle of the field on which he needs to pull the trigger.

Experience may play a part in making those throws more often and as Rodgers plays more, McCarthy is confident he'll complete more of them.
Posted by Matt Z at 8:02 AM No comments: