Week 1 Recap Packers vs. Bears and a look at Week 2 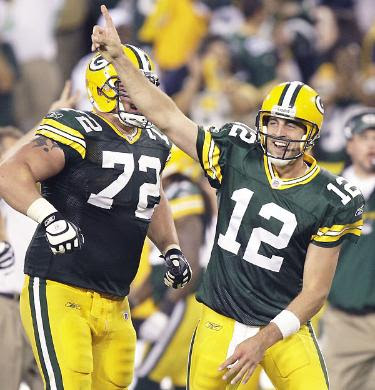 In what was to be a premier matchup against two star QB's last Sunday night turned out to be a duel of two Defenses. Packers QB Aaron Rodgers looked flawless in the preseason and had a QB Rating in the upper 150's (158.3 is perfect). Jay Cutler, Chicago's huge offseason acquisition, was supposed to bring something to the Bears they hadn't had in decades, an elite QB and an up-in-coming offense.

Well that kind of backfired as the real duel came between the two Defenses. The Packers implemented a new 3-4 defensive scheme and what once was a weak spot over the years now looks like a major strength after week 1. The Pack picked off Cutler 4 times, brought heavy pressure, and rattled the Bears offense from the opening snap. The Defense looked great, lets just hope they can keep that type of aggression and success for the rest of the season.

The Bears have traditionally had an elite Defense, but they certainly aren't get any younger on that side of the ball. The Bears D is not what it use to be, but they still gave Green Bay a run for their money. Rodgers was hit nine times and sacked 4 times. "We did a good job of picking things up, making the proper calls, but we just flat out lost some on-on-one situations that occurred and resulted in quarterback hits and sacks", coach Mike McCarthy said of his O-Line's performance against the Bears. First year starter Alan Barbe was exposed all game at RT, giving up 3 sacks to Bears DE Adewale Ogunleye. After a miserable performance like that, expect Barbe to be tested all season long. Packers will have to keep an eye on their O-Line and might even consider juggling the line around with Center and former 3 year starter Scott Wells on the bench waiting for another opportunity.

The Packers did win 21-15 in some late game heroics by QB Aaron Rodgers who connected with WR Greg Jennings on a crucial 3rd and 1 on the 50 yard line for what would end up to be the game winning TD with 1:11 to play.

The Packers did not look impressive on Offense like they did all preseason, but then again it was only 1 game against a bitter rival. Both TE's were noticeably absent from the Offense. That had a lot to do with the poor O-Line play. On many downs the Packers kept a TE on Barbe's side to help with protection. Jermichael Finely is supposed to have a "breakout season". Not if he's helping our line block all game!! Packers square off against the Cincinnati Bengals on Sunday.

Game Notes:
Guard Daryn Colledge sprained his foot at practice on Thursday. His status is still uncertain for Sunday's game. That makes for an interest debate on weather rookie TJ Lang would fill in, or if Spitz moves over and Wells comes in at Center. Lets hope Colledge can go, he was one of the few bright spots on the line last Sunday.

Safety Atari Bigby will be out for an extended period of time with a knee injury. Word is he tore his MCL and will be out for 4-6 weeks. Aaron Rouse will be replacing him on Sunday at Safety. Rouse saw some action last Sunday and he too is recovering from an injury as well. He looked timid and played things pretty safe with big cushions. He'll need to step up his game and bring it to an elite level like the rest of the starters or he'll be exposed all day by Pro Bowl QB Carson Palmer.

Bengals WR Chad Ochocinco (formerly known as Chad Johnson)has proclaimed he wants to do a Lambeau Leap on Sunday. Well he has to get in the end zone first. I'm not sure fans will be that welcoming, but we'll be watching Sunday.
Posted by Matt Z at 3:28 PM No comments: