5 In a Row, PACKERS WIN against Bears Improve to 9-4 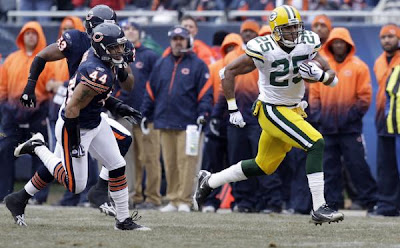 WOW it has been a long time since my last post. Had PC problems, internet connection problems, you name it. But I'm back to post again and what better way to start is after another Packer win over the Bears 21-14, improving to 9-4 and staying strong as one of the leaders for NFC Wildcard.

Here's a quick recap of the game and some thoughts on the Packers so far this season. I promise, more to come!!!

Now Packers need to do a better job of putting teams away. After watching the 1st quarter I thought we were going to run away with this one……literally. The O-Line did another good job of keep ARog protected. I personally credit that to having Tauscher back on the line and in football shape. We SORELY missed his presence. The revolving door at RT has been filled and hopefully they’re a lot smarter this offseason but I’m sure TT will send him packing AGAIN.

Nice to see Grant get his. He ran like a man who WANTED 1000 yards, and he did it very quietly. Never been a big Grant fan and I still think the Pack lack to real “game-breaker” at RB. This year’s draft is extremely deep at RB. Most likely TT will address RB in middle rounds 3-5 where you can still find excellent talent, especially this year.

I actually liked the 1st play calling by M3. Nice combination off Runs and Passes. We all know how pass happy M3 is so great to see him stick with the run. However 3rd and over 4 yards does not mean hand the ball off to Green or Jackson. Gotta still work on that. Having Finley back has been a real treat. He is going to be an absolute threat for years to come. He’s finally proving he had all the talent to back the hype. Always had a rap of being a young cocky superb athlete who needed to grow up. The Packers Offense really needs a TE and one who can run the middle of the field. It’s great to see how Defenses get totally screwed with Finley in there. M3 spilt him out wide and ran him up the middle of the field. I’ll take ANY LB in the NFL on Finley and take Finley every time. Split him out and what 5-11 or 6ft DB can cover an athletic 6-5 TE like Finley. Who do you cover DD, Jennings, Finley. LOVE HIM!!!!!

Capers called another hell of a game. C-Wood got his and for sure is the NFL Defensive Player of the Year. He’s an amazing talent and love him. That’s why I bought his jersey!!!!. Capers got created this week while 4 of his D-Lineman were injured. I heard Evan Dietrich Smith even had to play DL due to injuries. Capers unveiled a new formation called “psycho” with 1 down lineman and 5 LBs…………..5!!!!!!!!!! That’s using your depth to your advantage!!!! LOVE CAPERS, would hate to see him leave after 1 year. Only thing we got going for us to keep him, is his track record as a head coach, and the fact that the NFL trend is to hire young up-in-coming coaches. That and having Cower, Dungy, Shannahan, hell even Gruden (highly unlikely) ahead of him.

Steelers still scare me. Don’t let the record fool you either. This is a GREAT team with an unbelievably hard schedule. That’s what you get for winning the SB. They’re pissed and they are the TRUE 3-4 team. All others are trying to be them. Going to be a close defensive game. Like 13-7 or something like that.

Special teams continue to be a weakness and needs to be addressed ASAP or in offseason. Having Jordy Nelson as a warm body catch kickoffs and punts is not my idea of “Special”. Did you see Desean Jackson last night!!!!! Fantasy!!!! Now that’s special. That’s what the Packers need. Not Green or Nelson. Not C-Wood (I love him but gotta keep it real). Need to improve our returns ASAP. Field position is huge in close games. Need to improve ASAP!!! Punting game is marginal. Not much we can do there. Crosby, make a damn field goal. If I were him I’d rent and not buy a house in Green Bay. NFL stands for Not For Long the way he’s kicking. @#$%!!!!!!!!! Cannot miss field goals that NFL kickers SHOULD MAKE. 50+ I get it, I understand inconsistency….I get that. Missing 38 and 42 yarders is flat out unacceptable. My god if I hear Crosby one more time say he’s kicking the ball well, I’m gonna drive up to Green Bay and break my foot off in his a$$ and show him how to kick…….kick his a$$. @#$%!!!!!!!!!!

All and all I’m a happy man for a Monday morning. Always am after a Packer win and especially after a Packer – Bear win!!! GO PACK GO. Still have plenty of areas to improve but a W is a W and I’m good with that. 5 in a row is nothing to complain about. But this game should have been 48-7. Haven’t seen a game by the Pack like that since Packers – Redskins on MNF 8+ years ago.