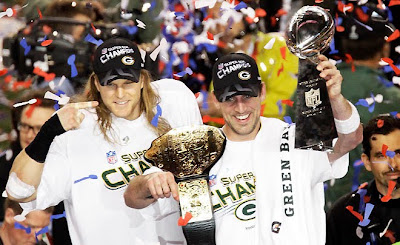 It's been sometime since I've written on this blog. What an amazing time for WI sports and what a bad time to take a break from blogging.

What's happened in WI Sports while on hiatus:

* GREEN BAY PACKERS WIN SUPER BOWL XLV!!!!! The Packers defeated the Pittsburgh Steelers 31-25 in Arlington, TX at the new $1.2 billion dollar Cowboys stadium, known as "Jerry World". Aaron Rodgers was named Super Bowl MVP, throwing for over 300 yards and 3 TD's. The game was as exciting as it gets for Packer fans, who watched their beloved Green & Gold jump out to a 21-3 lead early in the 2nd quarter. The Packers dominated early, but injuries mounted and before halftime the Packers were without WR Donald Driver, CB Charles Woodson, S Nick Collins, & CB Sam Shields. Both Driver and Woodson would not return to the game. Those injuries allowed the Steelers to battle back, but the Packers prevailed and brought the Lombardi trophy back to where it belongs......the true Titletown, Green Bay, Wisconsin.

* UW Football has a solid season, winning the Big Ten Championship and earning a berth in the "Grand Daddy of 'em All", The Rose Bowl. Unfortunately the #5 Badgers lost a nail biter to the #3 TCU Horned Frogs, 21-19. UW will be losing several players to graduation and one that has opted out early for the NFL draft. DE JJ Watt and OL Gabe Carimi (Outland Trophy winner for best Lineman in NCAA) are both projected to be selected in the 1st round of next month's NFL Draft. Badgers will also be losing QB Scott Tolzien, who won the Johnny Unitas Gold Arm Award, which is given to the top Senior QB in the nation. Other notable losses for the Badgers are TE Lance Kendricks and OG John Moffit, both are projected anywhere from round 2-4.

* Milwaukee Brewers go "ALL IN" once again trading 4 players during the MLB "Winter Meetings" for Pitcher and former CY Young, Zack Greinke. However just a few days ago, Greinke broke several ribs in a pickup basketball game and will begin the season on the DL (missing approximately 2-3 starts). We'll have to remember those 2-3 starts in the final weeks of the season many, many, many months from now. The Brewers gave up SS Alcides Escobar and CF Lorenzo Cain who both were on the Brewers roster last year. Escobar was their starting SS and was nearly untouchable as a prospect for the past several years. Cain replaced CF Carlos Gomez after injuries and poor performance. The other two players involved were minor league P Jake Odorizzi and P Jeremy Jeffress. Brewers also made a trade from Shaun Marcum from Toronto for minor leaguer Brett Lawrie.


What we have to look forward too:

* 2011 NFL Draft
* MLB Season and the new look Milwaukee Brewers with a pitching rotation of Zack Greinke, Yovani Gallardo, Shaun Marcum, Randy Wolf, insert #5 starter here ???
* NFL Labor dispute and possible Lockout (Wouldn't say I'm "Looking Forward" to this, but it is something to keep an eye on. No trades or signings, other than internal team moves can be made currently)
* MARCH MADNESS!!! UW Badgers are a lock; Marquette is on the bubble but should get in
* NBA Playoffs and seeing if the Milwaukee Bucks can squeak in. They're currently 3 games out of the #8 and final spot in the Eastern division.

So lots happened and with time permitting in my life, I'll go into greater depth on the Super Bowl game and moves that have been made for the Green Bay Packers. I may also review the UW Badgers Football season and how they look going into 2011. And I'll also take a look back at the Milwaukee Brewers offseason moves and what to expect in 2011!!!

More to come and lots to recap. Instead of daily, this might turn into Wisconsin Sports Weekly.......again time permitting.