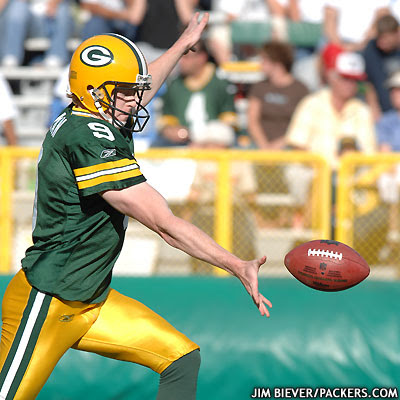 Goat of the Week

"Green Bay P Jon Ryan. I know the wind was awful in the Windy City, but come on. Two punts blocked, in part because of his glacially slow mechanics, and one fumbled snap from center. That's intolerable on a team that needed this game to stay in the home-field race with Dallas."

Isn't he from Canada eh??? To punt like that in those conditions is pretty tough, but the Bears punter didn't seem to have any problems. Ryan needs to get the ball out a lot quicker. The Packers have had strong Special Teams play and surely needed it last Sunday vs the Bears. The Pack lost 35-7 in sub zero temperatures and 50+ mph wind. Playing at Dallas might not be too bad of an idea for the NFC Championship.
Posted by Matt Z at 11:06 AM No comments:

Vols may lose players for Outback Bowl against Wisconsin

NASHVILLE, Tenn. (AP) - Tennessee coaches are concerned about the academic eligibility of a few players for the Outback Bowl, including two starters on defense.

A university official said linebacker Rico McCoy and defensive tackle Demonte Bolden are among those who could be ruled out for the game after the school releases fall semester grades Friday afternoon.
The person did not want to be identified because the academic report had not been released.
Coach Phillip Fulmer said Thursday during practice that he was concerned about the eligibility of "three or four guys, and maybe a couple more than that."
McCoy, a sophomore, has started all 13 games this season and is second on the team with 106 tackles.
Bolden started each of the 12 games he played in this season, but was suspended against Louisiana-Lafayette for an unspecified violation of team rules.
No. 16 Tennessee (9-4) faces No. 18 Wisconsin (9-3) on Jan. 1 in Tampa, Fla.
Story from Associated Press courtesy of Foxsports.com http://msn.foxsports.com/cfb/story/7592448?MSNHPHMA
Posted by Matt Z at 2:20 PM No comments: 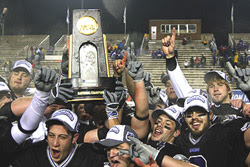 The third trip to Salem proved to be the best for the University of Wisconsin-Whitewater as the Warhawks defeated #1 ranked Mount Union College, 31-21, to claim the 2007 Amos Alonzo Stagg Bowl title. The win marks the first NCAA Division III football championship for UW-W, also snapping the Purple Raiders 37-game winning streak.
While defense may have been the prevailing factor in the opening half of play, Justin Beaver and the UW-W offense went toe-to-toe with the vaunted Mount Union attack in the second 30 minutes of action.
Beaver took home his second award of the weekend, earning the game’s Most Outstanding Player award after running for 249 yards and a touchdown on 31 carries.”I’ve said along that we have a great group of seniors and that they played their hearts out,” explained UW-W head coach Lance Leipold. “Our staff did an outstanding job in making sure we believe. I can’t say how proud I am of our guys and the rest of our program.”
Coming out of the half with a 10-0 lead, the Warhawks increased their advantage to 17-0 when lineman Michael Sherman made a Beaver fumble obsolete as he came away from the pile in the endzone for a touchdown.
Mount Union’s offense, which had averaged better than 54 points coming into the Stagg Bowl, sprang into action with a pair of Nate Kmic touchdown runs. Kmic scored his first on an 11-yard carry. Linebacker Tony DeRiggi forced the ball from Beaver’s grasp for a second time on the ensuing drive, leading to Kmic’s second score via a one-yard plunge.
Beaver made up for his rough third quarter with an excellent fourth frame. He toted the ball 10 times for 115 yards including a 13-yard touchdown run to make the score 24-14 with 6:11 to play. He also darted 66-yards on the Warhawks’ next possession to set-up quarterback Danny Jones’ second touchdown sneak of the day and put the game out of reach.
“You can’t get anything better than winning a nation title in your last game,” said Beaver.
UW-Whitewater defense had an outstanding first half, keeping the Raiders off the scoreboard in the first half for the first time since prior to the 1990 season.
The Warhawks forced three lost fumbles and held standout receiver Pierre Garcon to only four catches for 30 yards. Linebacker Jace Rindahl led the unit with 16 tackles (10 solo). Ben Farley had 13 stops and two forced fumbles, and Anthony White collected 1.5 of UW-W’s three quarterback sacks.
“We played very well in spots, but made a few too many mistakes,” said Mount Union head coach Larry Kehres. “A couple of the bounces of the football got away from us, and that’s what cost us the victory.”
Beaver’s running performance helped UW-W to 274 yards rushing. Jones added 27 yards rushing and a pair of scores. He also threw for 136 yards, although completing only 9-of-24 passes. Neil Mrkvicka collected five receptions for 52 yards. Aaron Rusch had three catches for 61 yards.
Kmic led the Mount Union offense with 121 yards on the ground and a game-high three scoring runs. Quarterback Greg Micheli added 90 yards rushing to go with 235 yards. Bryson Davis proved to be his big play receiver, hauling in four passes for 98 yards. Justin Wray had five receptions for 52 yards.
Pat McCullough led the MUC defense with 10 tackles. Nick Parr picked up both Mount Union sacks, and Matt Kostelnik and DeRiggi forced UW-W lost fumbles.
Story courtesy of http://odac.bridgewater.edu/staggbowl/
Posted by Matt Z at 2:00 PM 1 comment:

Is this what we can expect @ Lambeau in the Playoffs 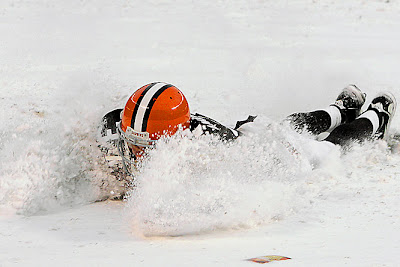 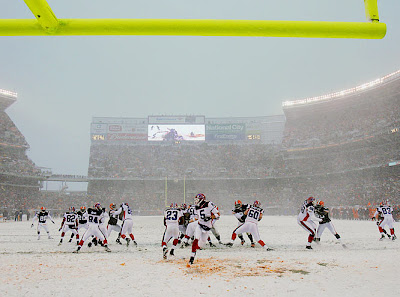 Packers Clinch 1st Round Bye with a Win in St. Louis 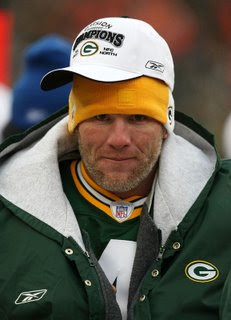 So it's been awhile since my last post, but the Packers, NFC North Division Champions have been rolling. They improve to 12-2 with a win in St. Louis, beating the Rams 33-14. The Packers are now tied for 2nd in the NFL at 12-2. With the win they also clinched a 1st round bye after Carolina beat Seattle. Dallas also lost dropping them to 12-2, tied with the Packers. Their remaining games are against Carolina and division rival Washington, who both are hot right now.

Favre set yet another milestone, passing Dan Marino on Sunday as the NFL Career leader in Passing Yards. Favre went 19 of 30 for 227 yards, 2 TDS and 2 INTs. The Packers Special Teams came through again putting the Green & Gold in Rams territory for almost the entire game. Koren Robinson had a big day, setting up 2 TDs with his returns and rookie kicker Mason Crosby went 4-4 on FGs. Did you know Crosby leads the entire NFL in scoring!!!! Dave Rayner, who's that????
Packers take on the Bears Sunday at Chicago. The Packers are looking for a little redemption. GO PACK GO!!!
Posted by Matt Z at 9:49 AM No comments: