Brewers are HOT!!!! Injuries begin to pile up 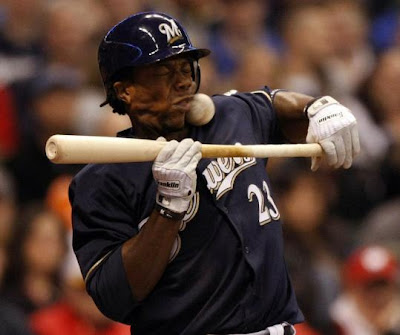 Just a few weeks ago Brewers 2nd Baseman Rickie Weeks was having the best start in his career. Weeks had a lot of pressure coming into this year to perform and he did so admirably. Then all of that came crashing to an end when Weeks struck out swinging and had some pain in his wrist. Tests later would show a torn tendon sheath in his left wrist. What does that mean.......Weeks out for the season.

To replace Weeks, the Crew has used primarily Craig Counsel & Casey McGehee, a far cry from Weeks. Counsel is batting over .300 and between that and his defense, it's hard to keep him out of the lineup. Counsel worked with former Interim Manager and Brewers Batting Coach, Dale Sveum on dropping his horrendous batting stance that rivaled Juilo Franco's. Results have been great.

It was also reported that the Brewers plan to give hotshot shortstop Alcides Escobar some time at second base in Triple-A Nashville. We could see a call-up if Counsel/McGehee doesn't work out.

JJ Hardy has been absent from the Brewers lineup of lately and was reported having Back Spasms. Hardy got hurt while running the bases and left in the fourth inning of Friday’s game against the Twins. He was out of the lineup the rest of the weekend and last night's opener against the Cards. Hardy has had problems with his back in the past, but said this isn’t as serious as previous cases. He said it’s “annoying, more than anything.”

Speaking of the opener against the Cards, St. Louis pitcher Adam Wainwright drilled Brewers LF Ryan Braun in the wrist in the 3rd inning. Braun played the field in the fourth, but did not get another at-bat and left before the fifth. X-Rays came back negative, and Brewers skipper Ken Macha might be wise to sit him one more game.

Brewers are currently tied for 1st in the NL Central with the Cards and stand at 27-19. The Brewers have the 3rd best record in all of baseball behind only the Rangers (27-18) and Dodgers (32-15). Before last night's loss to St. Louis, the Brewers had won 4 straight and won 11 of their previous 12 against the Cards. Brewers send Lefty Manny Para to the hill this afternoon for the rubber match against Todd Wellemeyer.
Posted by Matt Z at 8:24 AM No comments: 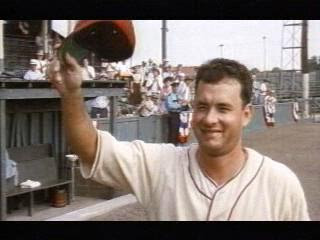 So it has been what seems like ages since my last post. In fact, looking over the site that I use to manage almost daily, I found my daily poll to be "What should the Brewers do with Gagne". WOW, now that's old!!! Think I have to update that soon.

1. Brett Favre traded to New York Jets
Now thankfully I did not follow on my blog the constant media update on Favre. News reports in WI showing his plane landing in GB, and following his car to his home in GB. Only to see the GB legend get traded to NY. Now it was a lose-lose for TT & the Packers. Favre lost a lot of fans throughout this saga, but once again Favre has retired.......or so we think. Stayed tuned, if you care anymore (i really don't) to see if Brett throws on the Purple & Gold and tries to stick it to TT & all the naysayers one last time.

3. Ned Yost gets fired with about 15 games left in the season
An unprecedented move in MLB, as Ned Yost was fired with only weeks left in the 2008 season. Replaced by Dale Svuem, who is currently the Brewers Hitting Coach, after losing out on the skipper job for 2009 to former A's Manager Ken Macha.

4. UW Football sucked
Enough said, I'm hoping for a big turn around in 2009, and can't wait to see Curt Phillips play at QB. He's truly the first QB in as long as I can remember, to actually bring some playmaking ability and buzz to the QB position.

5. Buzz Williams leads Marquette to NCAA Tourney berth in his first season at the helm and a strong season in the Big East
MU was very exciting to watch in 2008-2009 as the trio of James, Matthews, and McNeal gave it one last run at an NCAA Championship. Milwaukee was full of excitement and MU hoovered in the top 10 for many weeks. But their brutal stretch to close the season demoralized this team along with the loss of James with a fractured foot. James would amazingly come back for a game in the NCAA tourney but was really a non-factor. I'm going to miss watching those 3 play together.

Feel free to add a comment if any other stories from 2008-2009 really brought some excitement to WI. I'm sure there are many more I missed. So lets hear what you think!!!
Posted by Matt Z at 10:24 AM No comments: