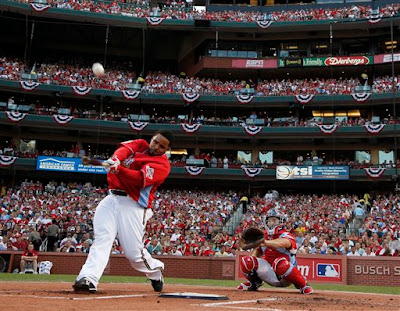 St. Louis — Asked earlier in the day what his strategy would be in the All-Star Home Run Derby, Prince Fielder smiled.

"Just hit the ball hard," the Milwaukee Brewers slugger said. "And if I get under it a little bit, I might have a chance."

A very good chance, as a matter of fact.

Doing what he does best - hit the long ball - Fielder became the first Brewer to win the Home Run Derby when he bested former minor-league teammate Nelson Cruz in the championship round Monday night at Busch Stadium.

Fielder still had three "outs" to go when he socked his sixth home run of the final round, topping the total of five by Cruz, who went first. Almost before the ball cleared the fence in right-center, teammate and fellow all-star Ryan Braun greeted Fielder at home plate, engaging him in the "boxing" routine they often simulate after home runs.

Fielder's two young sons, Jadyn and Haven, also rushed out to give their dad a celebratory hug. Fielder then followed tradition of a Brewers victory by untucking his red all-star jersey, a habit that has drawn criticism from the hometown team here at times.

"It's something you see growing up as a kid and I'm just happy my kids were here and I got to win," said Fielder, who hit a total of 23 home runs during the three rounds for an average of 439 feet.

"I'm just happy. You never think you're going to win one."

Fielder started the competition using a bat of injured teammate Rickie Weeks but said he switched to one of Braun's models because it was longer.

"Once I grabbed his bat, it felt good," Fielder said. "He looks good with it."

Fielder and Cruz played together in the Brewers' system at Class AAA Nashville in 2005 but Cruz was sent to Texas in July 2006 with Carlos Lee in the six-player trade that brought closer Francisco Cordero and outfielder Laynce Nix to Milwaukee. The Brewers have nothing left from that trade but Cruz enjoyed a breakthrough first half to earn his first all-star nod with the Rangers.

"We know each other really good," Fielder said. "So, it was a lot of fun. It's kind of weird. You never figure you're going to have a Home Run Derby against a former teammate. It was pretty cool."

Fielder didn't come up with a Derby pitcher until Sunday, when he invited Nashville hitting coach Sandy Guerrero. When he competed in the 2007 Derby in San Francisco, Fielder used Mike Guerrero, Sandy's brother, now the manager at Class A Brevard County.

"I asked for (Sandy) in '07 and he wasn't able to, so I asked Mike," said Fielder, who bowed out in the first round with three homers that year. "He helped me through the minors. And he throws good batting practice, too."

It was no easy task for Guerrero to get to the ballpark on time. He and wife, Jessica, drove from Nashville to their home in Huntsville on Sunday evening, then took a 6 a.m. flight Monday.

Guerrero arrived here at 2:30 p.m., just 4½ hours before the Derby began, and rushed to the ballpark while Jessica checked them into a hotel. He did take time to sit down with Fielder and devise a game plan.

"I told him to take some pitches, make sure his timing is right," Guerrero said. "He was pretty locked in. He kept his cool. 'Nellie' was going ahead of him so Prince knew what he had to do. He was very competitive."

Fielder hit the four longest home runs of the competition and eight of the top 10, including a 497-foot blast in the first round and a 503-foot moon shot in the second round that electrified the crowd of 45,981.

"I've never hit a ball 500 feet before so that was pretty cool," said Fielder, who had a wait of nearly 1½ hours before hitting in the second round.

Cruz and Fielder were the first players to hit in the opening round and set the bar with 11 homers each. Philadelphia's Ryan Howard advanced with seven homers and St. Louis' Albert Pujols joined the final four with five after a "swing off" with Minnesota's Joe Mauer and Tampa Bay's Carlos Peña.

The two players with the highest cumulative totals through two rounds advanced to the final. Fielder hit six in the second round to total 17 and Cruz added five more to reach 16. Howard hit eight that round but bowed out with 15 and hometown hero Pujols was eliminated with a total of 11.

In the championship round, previous totals were erased and Fielder and Cruz started from scratch. Fielder matched Cruz's total of five with only four "outs" on the board but made three more "outs" before crushing his no-doubter for No. 6.

"I guess I was trying to hit the ball too far," Fielder said of that added suspense. "I got a little tight. Sandy told me to relax and I was able to hit one more."

The closest any Brewer had come to winning the Derby in the past was Jeromy Burnitz, the runner-up to Ken Griffey Jr. in 1999 in Boston.
Posted by Matt Z at 10:38 AM