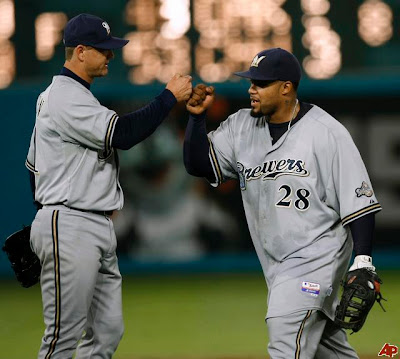 Milwaukee's Trevor Hoffman, the game's all-time saves leader, was named to the team Sunday morning after it was announced that Los Angeles Dodgers closer Jonathan Broxton, who pitched in the first game of this series, won't play because of an irritated nerve in his right toe.

That makes way for Hoffman's seventh all-star appearance and his first in a uniform other than the San Diego Padres', the team with which Hoffman built his Hall-of-Fame career.

"Big surprise," Hoffman said. "It's nice to come in and get that kind of news dropped on you.

"It's a really big honor to be able to represent not only the Brewers, but the Brewer bullpen and the work they've accomplished in the first half. I think that's indicative of being able to put a guy like myself in position to go."

The Brewers' bullpen came into the final day of the first half ranked sixth in the National League in earned run average (3.78) and sixth in innings (276 1/3 ).

The All-Star Game is a celebration of stars, obviously, and since the bullpen largely operates in anonymity, all-star pitchers are typically starters and closers.

"The guys that do a lot of the grunt work don't get recognized," Hoffman said. "It's the guy at the end, the closer, that reaps a lot of the reward for the work that they've done. We're a tight-knit group and we try to truly pass the baton from one guy to the next and achieve a win."

Hoffman is tied for fourth in the NL with 20 saves and his 2.05 ERA is near the top among regular relievers.

Every All-Star Game has been memorable for Hoffman, but he said this one would hold a different significance because he is doing it with a new team and after plenty of clubs passed on him after last season, probably thinking he was washed up.

"Age being associated with it, you relish the opportunity because you don't know how often it's going to come along," said Hoffman, 41. "I don't know if it's really sunk in yet, but there's some satisfaction in knowing there hasn't been a drop-off, not only in production but in having an impact within an organization, within a group of men."

When Hoffman wasn't selected by the players or NL manager Charlie Manuel for the team, he planned to "lay low" and do some fishing around Milwaukee with his three sons, ages 12, 11 and 10.

But when he was informed of his selection, it wasn't difficult to get them to switch from fishing to all-star mode, although some fishing is still tentatively planned for Wednesday.

"My kids are really excited," Hoffman said. "They're older and have been to quite a few, but they're starting to understand the dynamics that are part of it. They're really excited for Prince (Fielder) and the home run derby. I'm excited for them to have an opportunity to go. They're at that good age.