Injury will keep Morency out at least two weeks 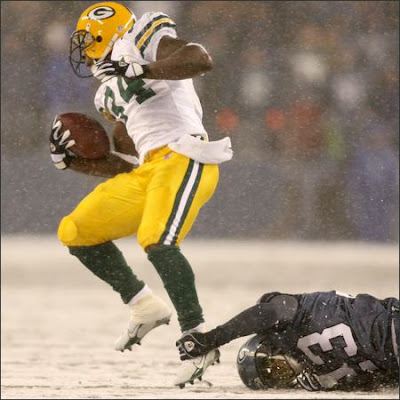 It will be at least two weeks before Vernand Morency returns to the practice field, and when he comes back, the gap could be narrowed between him and the rest of the pack in the competition for the Green Bay Packers' starting running back job.

Morency's injured knee turned out to be worse than originally thought, and although coach Mike McCarthy said surgery wouldn't be needed to repair it, the third-year back will be sidelined "a couple of weeks." McCarthy wouldn't reveal any details about the injury and Morency did not make himself available to reporters in the locker room after practice.
On Sunday, general manager Ted Thompson described the injury as a bruise, but after further examination from the team doctor it was determined to be more than that.
"Pat McKenzie just thinks it's a little more serious than he initially thought," McCarthy said. "It's going to be a couple of weeks."
Morency injured his knee in the first practice Saturday. He's unsure exactly when it occurred, but McCarthy said there were two consecutive plays where Morency put stress on his knee.
"The one where he had the hard cut to the left, he kind of fell a little bit there, and there was a play, I think it was actually prior to that, where he was in a situation where his legs got crossed up on the pass protection that he was blocking on," McCarthy said. "I think it happened on one of those two plays."
Morency's injury raises some flags about his durability. He has never been a full-time starter in the National Football League and has had some injury problems, including a lower back ailment that forced him to miss two games last year and limited him to 11 carries in the three games after that.
If he's out only two weeks, Morency will still have three exhibition games to make his case for the starting job, but if he's out three, he'll be cutting things close. The third exhibition game is always the most important because of the amount of time the starters play, so if anything, he should be shooting for the Jacksonville game Aug. 23.
"I think it's for precautionary reasons," fullback Brandon Miree said. "I don't know what everything is. They just want to make sure he's healthy. We need him for the entire season. It's one of those things we don't want to take any chances with."
In the meantime, the Packers are introducing some added competition to the race. Since Morency went out, rookie Brandon Jackson and second-year pro P.J. Pope have been first in line to audition for the job.
But seventh-round pick DeShawn Wynn is gradually coming back from a stomach virus that caused him to lose 10 pounds and miss the first two days of practice, and rookie free agent Corey White is getting an extended look. Because nothing is settled in a backfield without a clear-cut starter, there will be an opportunity for someone to prove he's more reliable than Morency.
Courtesy of Tom Silverstein from today's Milwaukee Journal Sentinel:
http://www.jsonline.com/story/index.aspx?id=639830
Posted by Matt Z at 12:46 PM