Crew rolls to fourth straight; Sheets out longer than expected 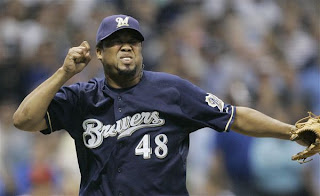 Another victory at home. Another tense one-run decision.

Continuing their trend of winning the close ones, especially at home, the Brewers nipped the Arizona Diamondbacks, 3-2, at Miller Park to claim their fourth consecutive victory.

By winning four in a row by one run, the Brewers tied a club record. And, with the Chicago Cubs finally losing to snap their own four-game winning streak, the Brewers moved to 4 ½ games on top of the NL Central.

"That's the name of the game - score one more run than the opposition," said manager Ned Yost, whose club boosted its home record to 34-14, tying Cleveland for the top mark in the majors.

"That's all that matters."

Closer Francisco Cordero has pitched in all four games of the white-knuckle streak, saving three and holding a tie in the other. He notched his major league-high 30th save against the Diamondbacks, working around a two-out single by Orlando Hudson.

"It's a sign that we're pitching well and playing well," said Cordero. "The way we're playing, there's going to be a lot of save situations."

The bullpen usually plays a key role on nights when Claudio Vargas pitches, and that trend didn't change. Vargas has yet to make it past six innings, and this time he didn't get that far. Finding immediate trouble in a two-run first, Vargas somehow kept Arizona off the board for the next four innings before departing with a 100-pitch count.

Despite Vargas' travails, he has become something of a good-luck charm, in a tantalizing, slow-as-molasses sort of way. The Brewers are 13-3 in his 16 starts, which no manager in the galaxy would complain about.

"I've become accustomed to his style and how he pitches," Yost said. "For a fifth starter, a lot of clubs would jump up and down to get him, with the success he has had."

As for Sheets, a dynamic ultrasound test confirmed what an MRI revealed the previous day. Sheets has a partial tear of the band of tissue that connects the tendon to the bone in the middle finger of his pitching hand.

Sheets was under the impression a partial tear meant he'd have to miss only a couple of weeks. But, after consulting other physicians, the Brewers' medical staff decided Sheets would not throw a baseball again for 10 to 14 days. He then would progress by throwing with a splint on the finger.

Based on that information, assistant general manager Gord Ash said Sheets probably would miss four to six weeks. Sheets, who was placed on the 15-day disabled list after injuring the finger in his outing Saturday night against Colorado, was not counting on an early return.

Ash admitted the timetable with Sheets was open-ended, with no target date for his return.