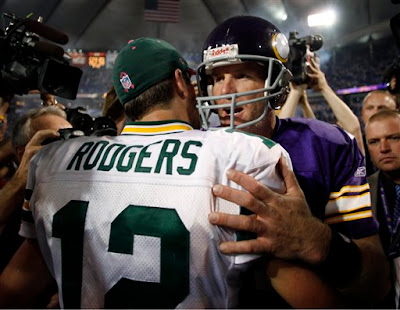 It's been quite some time since my last post and it only seems fitting that before this my last post had to do with the Packers going to MN to face Brett Favre. We've now completed that circus, falling to the Vikings for the second time this season in a 38-26 loss at Lambeau where Favre made his return to the Frozen Tundra. The game certainly lived up to the hype but in the end Favre got the last laugh.

Tom Silverstein has a great article in this morning's edition on the Milwaukee Journal Sentinel taking a look at both the Packers and Vikings and how each team got to where they are now through free agency, trades, and Ted Thompson's favorite....the draft.

Eight weeks into the National Football League season there is one thing you can say with certainty:

The Minnesota Vikings are a better football team than the Green Bay Packers.

The 38-26 loss the Packers suffered at the hands of the Vikings Sunday at Lambeau Field closed the argument. It also may force the Packers to accept that the Vikings have more talent and have done a better job building their team for a Super Bowl run.

Most people who witnessed the game would find that hard to dispute.

"I'm not going to compare us to the Vikings other than to say that they beat us yesterday and a few weeks ago," Packers general manager Ted Thompson said Monday. "We have to do some things to improve a little bit. The whole point of the NFL season is your growth and your improvement during the course of the season and we hope to do that and get better."

Thompson conceded that the Vikings (7-1) are a better team than the Packers (4-3) right now, but he was not willing to hand them the NFC North title yet. Reminded that only two of the Packers' 10 victories since 2008 have been against teams that had a winning record at the time (Indianapolis and Chicago in '08), Thompson said the process of getting to be a great team isn't easy.

But will they be better than the Vikings? No one would be willing to bet his house on that today.

The team that beat up the Packers both home and away arguably has also been outperforming the Packers during the past couple of off-seasons. The Vikings have added at least one big-time player each of the last four years and are to the point now where they may have as many as 11 players selected to the Pro Bowl this year.

2007: The Vikings drafted all-pro running back Adrian Peterson and budding star receiver Sidney Rice and signed starting tight end Visanthe Shiancoe in free agency. The Packers didn't draft a single player who has made an impact as great as Rice (Justin Harrell was the first pick) and acquired running back Ryan Grant in a trade.

2009: The Vikings signed future Hall of Fame quarterback Brett Favre and drafted Percy Harvin, who has proved to be a dynamic returner and receiver, and right tackle Phil Loadholt, who has started seven of eight games. The Packers signed free agent offensive lineman Duke Preston (cut in training camp) and drafted nose tackle B.J. Raji, who has had no impact, and linebacker Clay Matthews, who has star potential.

It doesn't take a football genius to figure out who has been doing the better job acquiring talent. When asked Monday if he thought the Vikings were more talented, Packers coach Mike McCarthy admitted he was impressed with their lineup.

"Everybody has got talent," McCarthy said. "I think they've got a lot of really good players. I respect the ability of their players over there. I think it's very obvious. Their quarterback has made a big impact. That's something, that quarterback productivity, they haven't had in the last three years that we have played them.

The Packers, it seems, are a different team with the same old problems.

The transition to the 3-4 defense has been relatively smooth, but it has not produced the results promised. Yes, the Packers rank tied for fourth in total defense (283.4 yards per game allowed), but if you took away performances against the horrible Detroit Lions and Cleveland Browns, the Packers would rank 21st (338 per game).

The offense, meanwhile, ranks ninth in total yards, but is on pace for 71 sacks, which would shatter the club record for a single season (62) and would put quarterback Aaron Rodgers in the top three all-time among individuals.

The loss to the Vikings Sunday exposed problems that the Tampa Bay Buccaneers (Sunday) or Detroit Lions (Nov. 26) might not be able to exploit, but the Dallas Cowboys (Nov. 15), San Francisco 49ers (Nov. 22), Baltimore Ravens (Dec. 7) and Pittsburgh Steelers (Dec. 20) definitely will.

"We're 4-3 for good reason," McCarthy said. "I think we have not handled two prime-time games very well. I'm confident that we'll learn from these experiences. I thought we would have learned more from the first game up there to this one. We had some repeated mistakes; that's frustrating and something that we take with full accountability as coaches.

One of those experiences is playing a game against a better team.

Article courtesy of Tom Silverstein from the Milwaukee Journal Sentinel
Posted by Matt Z at 7:50 AM